After an introduction to the world of fine cacao and its production methods at Ingemann’s processing and sorting facility, it was time to hit the (rather bumpy) road out to the cacao farms of north central Nicaragua. Here we would be meeting with the farmers, learning their trade and helping them with the harvest of some of their crop – the pods of the prized Theobroma Cacao tree.

As we set off it became clear Nicaragua has a very interesting highway and road system – the main highways are tarmac, like many other international highways around the world, but as you get to the smaller roads in the countryside, roads are meticulously laid out with intricate grey bricks, meaning every time there is a hole in the road it takes two people to come and fix it, even if it’s small.

We speculate on why they choose this road building method – is it a government plan to give more people work, thus generating more jobs, more spending and lifting the economy? Is it because tarmac melts in the sun (it gets to 40 degrees C + out here, so that would make sense). But in heavy rains would the road not wash away, and over time would the dust in between the carved stones not be worn down too much? We pondered on this for much of the journey until we reach Matagalpa, our home for the night. It was here we discovered giant cicadas – the size of small gerbils – with a sound not too unlike that of a fire alarm – and, after a supposedly brief foray into town…Reggatton; my new favorite music!

Next morning, after around 2 hrs sleep (the supposedly brief ‘just one drink’ in town turned out to be an all nighter) we leave Matagalpa and head ‘off piste’, even leaving behind the intricately laid out roads, off into the dirt roads that wiggle around in and out of the surrounding forests; peppered with cacao and coffee plantations and banana groves. The first stop was La Milanesa farm in El Tuma – a relatively young farm, with the youngest trees 2-3 years old and the oldest only around 8 or 9. Still we did find some ripe pods for the picking (and eating), and photographing and keeping, and also learnt of the different pests that can plague these beautiful trees; including pesky squirrels and parrots who bore holes in the fruit and suck out all the yummy pulp – vampires! Then it was time for a brisk hike in the blistering Nicaragua heat to hunt down the fabled heirloom or ‘mother’ cacao tree from which the graft cuttings are taken. We found them, old gnarled beauties with fine bunches of flower ‘cushions’ sprouting from their bumpy branches. More opportunity for pod gathering…and more pulp eating – these fruits are just TOO GOOD!

After spending the night in El Cua it was time for an early morning wander. Up at 4.30, after an ice cold shower – there are no Western comforts out here my friend – I took a leisurely stroll through the small town as people were just starting their days. Chickens scrabbled around in the dirt and pigs roamed freely as I admired the tiny single-room homes here, built of wood planks and corrugated metal sheets, and often painted in vibrant colours. There were some delightful modes of transport including old American school buses, tuktuks and horses – their stirrups covered with intricately woven leather. This idyllic scene was invaded abruptly by a gathering opaque white-blue cloud that appeared to be pluming from the houses – I may have got up early, but not early enough to beat the towns fumigators, and with only my hair to cover my face I legged it back to my accommodation through the thick mist with baited breath, running as fast as I could to clean air. Once back with the rest of the gang, and thoroughly fumigated, we filled up on gaillo pinto (a Nicaraguan staple of white rice, beans and soured cream) and tajadas, or fried plantain chips* to you and I before our next cacao venture.

*A recipe for these will be up shortly because you will become addicted to them!

The road ends in a river

Early morning rounds of the fumigation team caught us off guard

Now we were off into the deeper jungle, a bumpy car ride away up a mountain side; to Juan Flores in San Jose de Bocay, a farmer who grows not just cacao, but coffee, grain, and even rears chickens and cattle. One of Ingemann’s most successful farmers, he uses the tool book Ingemann created for their farmers which includes pages for them to plan and project their own farming futures and goals, record in real time the profit each of their crops is making, in addition to recording the cost of labour (including their own) and how much they spend on crop, fertilizer and equipment. A very organised method, but something that is currently not done that much in more developing countries.

Juan Flores has seen immense improvement and increase of his farms’ cacao production, so much so, in fact, that he’s looking to expand his cacao to take over the coffee! He takes us up his mountainside plantation. Slipping and sliding through the dried cacao leaves that have fallen to the forest floor he stops abruptly and squats down by one of his favourite trees – a Nicolizo (native to Nicaragua), it’s bright red bulbous pods matching his red t-shirt. He excitedly shows us how to test if a pod is ripe or not – scratch the outer skin with your nail or a key, or slice a very very fine sliver off with a knife; it should be a rich mango-yellow underneath, if still green then it’s not ready and depending on how green it is, Juan Flores and his fellow farmers can tell how much longer it needs on the tree! Cacao trees flower all year round, although only 5% of the flowers will be successfully fertilised with a mere 10% of those achieving mature developed fruits, so it pays to be extra careful when selecting which fruits to cut, and you must be meticulous so as not to damage young buds and flowers next to the ripe pods.

We climbed up and up through the plantation until the trees parted, giving way to a magical view over the valley. Coming back down to earth and Juan lets us keep a pod each from what we have harvested, and then insists we stay for the most amazing chicken soup ever – including a fine selection of starch – potato, rice, tortilla, plantain…and yucca – yepp, you can eat the root of the yucca tree, who knew!

Juan Flores and his cacao tree

Me and the cacao tree of Juan Flores

On top of the world

After lunch it’s time to say our goodbyes and pay a visit to another of Ingemann’s farmers who has just completed his harvest. Again, like Juan Flores, he has seen such success with cacao that he plans to take on more of the crop to increase his production. He shows us his farm and excitedly explains he is trying an experiment to help encourage the midge population (did you know, it’s those pesky little guys we have to thank for pollinating the flowers of the world’s favourite food?)? His crop is a fine example of predominantly Chuno and Barba pods, with the occasional Medalla (named due to it’s medallion shape) thrown in the mix. 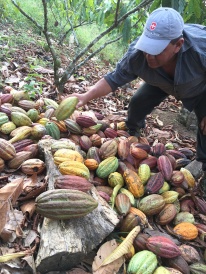 The tiny flower on the left will one day produce this giant red pod to the right. Simply amazing,

2 thoughts on “Searching for Cocoa” 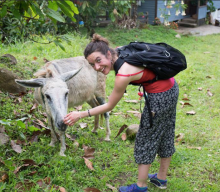 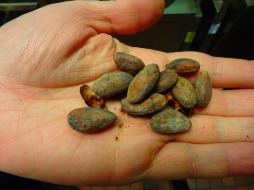 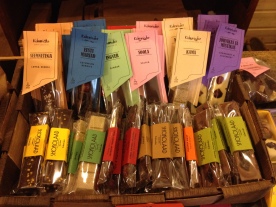 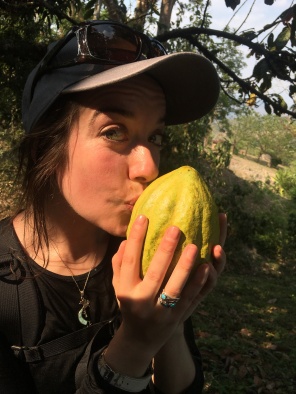 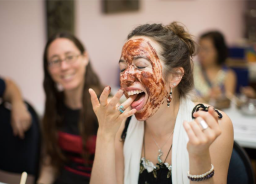 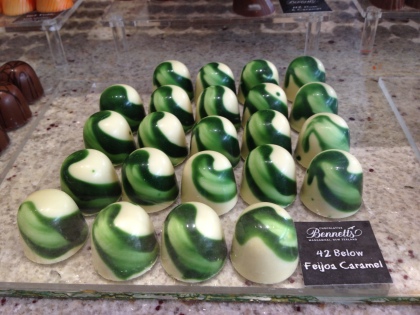 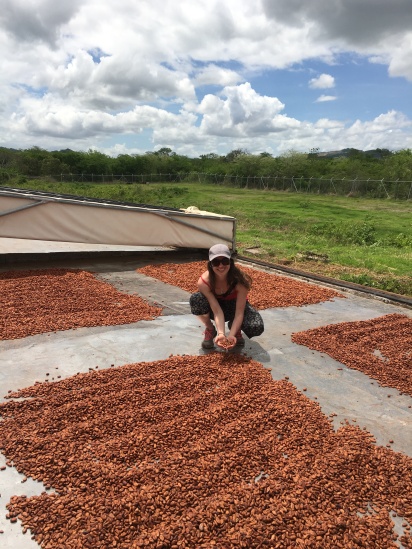 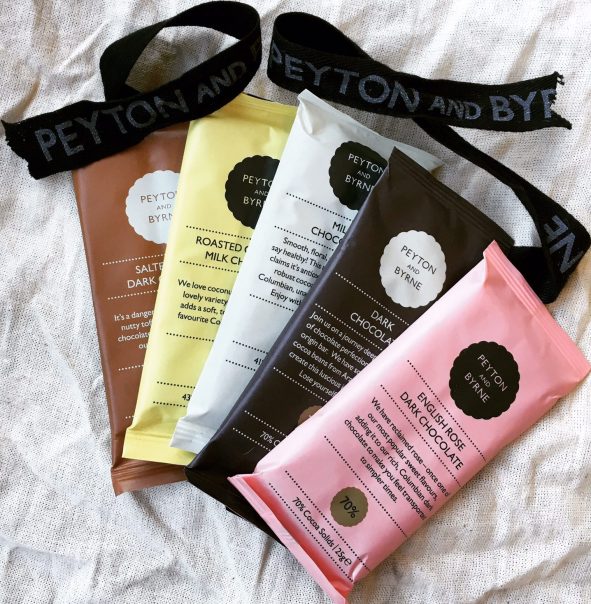 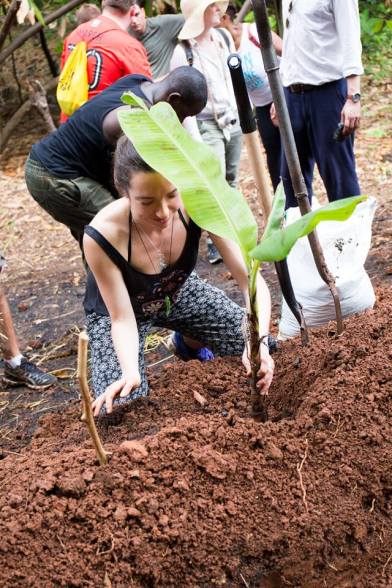 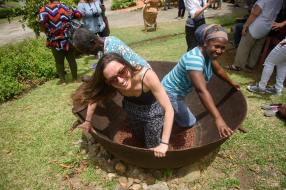 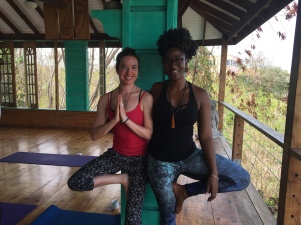 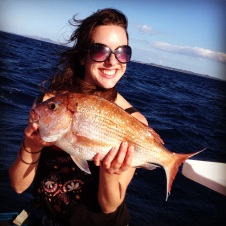 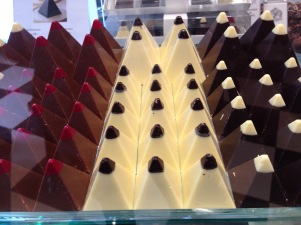